Today we boarded the Carnival Conquest ship. First off this is my 7th cruise and was by far the fastest embarking of a ship to date! We literally got on the boat in less than 15 minutes! I am not sure why we were whisked right on while others had to wait in Zones, but I am not complaining at all! Once on Board we started exploring a bit and of course  started looking for some good food to eat. We spotted the BBQ place up on deck 10 where nobody seemed to know it existed yet, so that was nice, we pretty much just walked right up and got us some yummy BBQ. 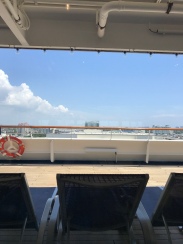 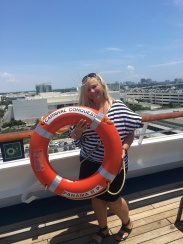 After eating we searched for a place to relax and soak up the sun before our cabin was ready. We found a cool  covered pod up on the adults only serenity deck and chilled there until we pretty much melted to death, it was HOT!

We then decided to see if our rooms were ready yet, we were told it should be ready by 1:30 but most of the cruises I’ve ever been on that was never the case, well sure enough our room was not only ready but our luggage was already in the room! I was already digging this ship! So we unpacked our luggage just in time for the dreaded Muster drill. After the drill we headed up to the sail away party. ( Carnival took some seriously funny pics of us, we took screen shots of most of them because we didn’t want to buy them but they were too funny to not keep!) 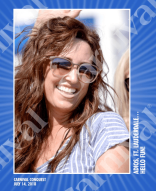 After the sail away party we cleaned up and hurried to the early comedian show, it was the family friendly show and it was actually pretty darn funny for a family friendly show so we were excited to see the adult show later on. We ended up getting a picture with the comedian and headed to dinner. 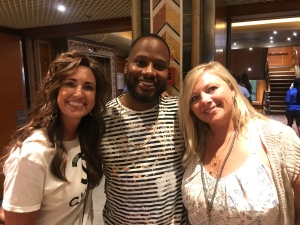 We chose the late dinner at 8:15. The first night is always kind of nerve-racking because they can sit you with random strangers, and you never know who it will be and if it will be people you have anything in common with or not. We were the first to sit at a huge 10 person table so we knew we would not be alone. The first people to sit down with us was a family of three, a mom, dad, and a teenage daughter. they seemed pretty sad to see us when they sat down. It was super awkward. Not much was said. Then a party of 4 sisters came and sat down. We tried to all make small talk but the family was being super quiet, we finally find out towards the end of our dinner that they were traveling with a group of 10 and they were supposed to be sitting with them, so when they were assigned our table they were completely confused and probably a lot upset. Well we got to talking with the sisters and we asked the waiter if there was any way we could all sit somewhere else and their group of 10 could all use this table to sit together? They got it all worked out so that they could be with their family, but that left us sitting with a group of sisters… hopefully they were OK with us joining their party… I guess they didn’t really have a choice, they were stuck with us. I am pretty sure one of the girls wasn’t too happy about it. She was a complainer,  one of those people who complains about everything, we had only just met her and I was exhausted by her negativity! She was complaining about Carnival and how crappy it was, she then asked me what other cruise lines I have been on, I said  I have only cruised with Carnival, she then asked in a snarky tone… WHY?, and without thinking I told her I guess I am just a Carnie… Becky and I had a good laugh at that, I am pretty sure she hated me, but that’s what made it even funnier! I have to wonder why someone who hates Carnival cruises would go on one and do nothing but complain about it? I am pretty sure she had a choice! LOL I was determined to not let her negative vibes get to me, but dang it was hard! 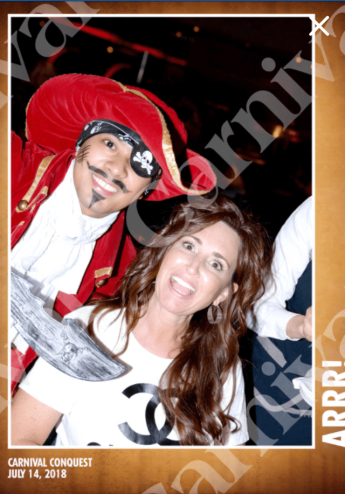 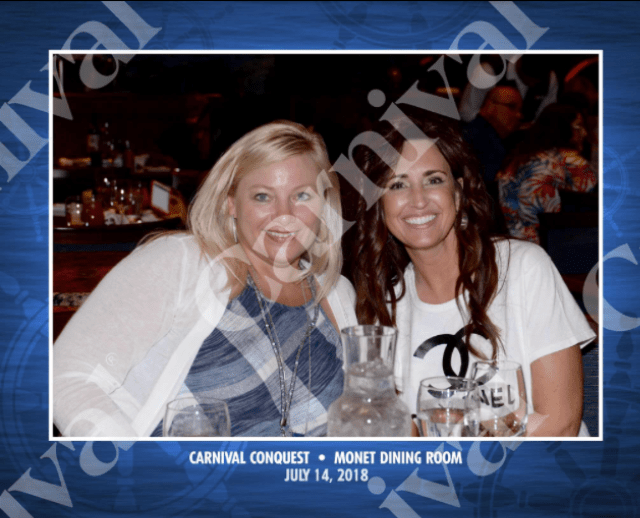 Because it took so long to figure out the dining room situation we missed the welcome aboard night show, so we went to the end of  karaoke, then to the late night comedy club and then finally we called it a night…we had our first excursion first thing in the morning, so we needed some shut-eye! What a fun beginning to our 5 day cruise!