Last night we went out to dinner with some of our good friends, Doug wanted Mexican food and we had heard good things about Maria Bonita Mexican Restaurant in Orem so we decided to give them a try. The place isn’t very big and there was a line of people waiting when we got there so that’s always a good sign. We put our name on the list and we were told there would be a 30-50 minute wait Doug and I got there a little early so that was no big deal except there really wasn’t anywhere to wait so we ended up back in our car. About 10-15 later we got a text that our table was ready, so that was a pleasant surprise. The place was crowded and loud so maybe not the best choice for catching up with friends.

Our waitress ended up being THE Maria, she is a tiny little thing, she is super pleasant and friendly, she even hugs everyone at the table before she takes your order. The funny thing is you can barely understand a word she is saying so I think at least two of us had no clue what they even ordered! LOL She is also a really good up-salesman, she’s so friendly and nice and you aren’t entirely sure what she is saying that you just nod and smile and end up with a big fruity drink or something that you didn’t realize you ordered!

Whenever I go to Mexican restaurants I always try their Flautas, because I had one once from a Mexican place In Park City that was SOOO good I am always trying to find another one like it….havent found one yet. The menu said it came with three Flauta’s, I asked Maria if I could just get one because I didn’t need three and she said NO, Um ok I guess just give me the three, I can have left overs for later… I was not prepared for what came out! 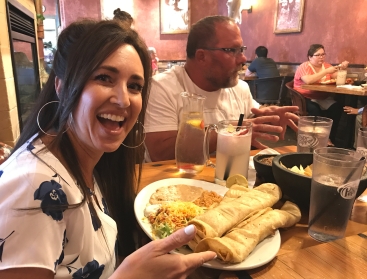 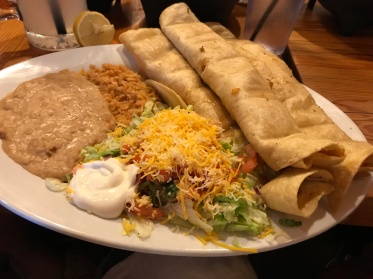 These things were huge!! I couldn’t even finish one! I mean who needs a flauta as big as my arm, let alone three of them?? So crazy,  I guess if you and a couple of friends want to split a meal it would be a great deal. After getting over the shock of how massive these things were, I attempted to tackle one, it was good, but not quite what I was hoping for. Doug was smart and just ordered two tacos, his looked amazing, I think i will try that out next time.

Sam ordered…Ummm nobody knows what Sam ordered  and we still dont know what it was even after it came out, but it looked amazing too..LOL

After maybe three or four bites of our meals one of the workers comes over and asks if we wanted to-go boxes? Um… I already knew my answer but dude, we just barely got our food! I realize it was a Friday night and they were busy, but this was a little much. I don’t like to feel rushed especially when trying to catch up with good friends. Overall It was good, but next time I go, I will try to go when it is less crowded, I will not order the flauta’s and I will bring my son Haden along so I know exactly what we are ordering!