I am probably the last person in the world you would think would want to watch a fight. In fact up until this past year, I had no desire to watch a fight. I literally had no idea what the fascination of watching two people trying to beat the crap out of each other was all about, It made no sense to me at all.

When my oldest son Josh was growing up he had a little group of friends who practically lived at our house. I was always so grateful for this group of boys because my Josh was a homebody, he didn’t get into the social scene at all during his Jr. high and high school years. He would rather stay at home and play video games. Because they would hang out at our house A LOT I got to know these boys, and I grew to think of them as part of the family. Gavin Weston was one of these boys. I can remember way back then him telling us that he wanted to be a MMA fighter one day. To me that was just like some kid saying they wanted to be a fireman when they grew up, something that sounds cool, but never really was gonna happen. Well when Gavin said that, he meant it. I am so proud of him. He knew what he wanted to do at an early age, set a goal and actually followed through with it. To me that is so inspiring.

Not only did Gavin actually follow through with it, He is really good at it! He has been in three fights so far and has won all three! Not just three wins, but three wins with in the first round! I have been to every one of them, I have been surprised how much I enjoy watching them. I’m sure it has something to do with knowing one of the fighters. But One thing I didn’t realize about these fighters is that they aren’t some crazy juiced up thugs that want to hurt everyone and everything, these guys are actually really nice guys who care for their opponents. This past weekend Gavin had a Knock Out in 42 seconds, so impressive, and even more impressive is while I could tell he was happy with his win, he was sincerely concerned about this poor guy who was laying there unconscious. I have a new appreciation for the sport. I probably will only ever watch the fights Gavin is in, but I think its good for all of us to go out of comfort zones every once in a while and go, see and do things that are totally out of our norms.  you may just find out something new about yourself. I have found that I have a little part of me that actually likes to watch two grown men fighting, who knew?? 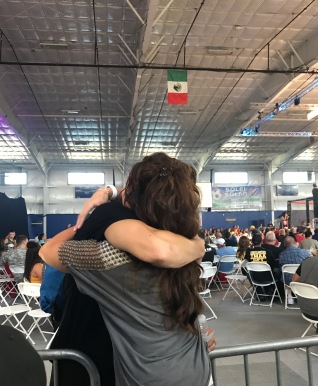