Our 3rd stop by far was my favorite stop, we stopped in Roatan,Honduras. This was my second time here, the first time I just stayed at Mahogany Bay ( Carnival’s own little resort) right off the Port where you take a little ski lift over to the bay and swim and float on rafts, sit in clam shell cabana’s and relax. I loved it, but this time that excursion was sold out, so I knew it would be miserably crowded.

I did some research and decided to go with hiring a private driver to take us to where ever we wanted to go for the day. We went with Boddentours.com. My daughter In Law loves animals and really wanted to see the monkeys, I really wanted to see a Sloth, I mean where else in the world could you go and see one of those? I also wanted to see the Iguana farm because I have wanted a pet Iguana since I could remember! So we did just that! We Ordered The Best of Roatan Private tour of the Island, where you decide what you want to do, and your tour guide takes you there. It was only $25 per person with a private air-conditioned van. 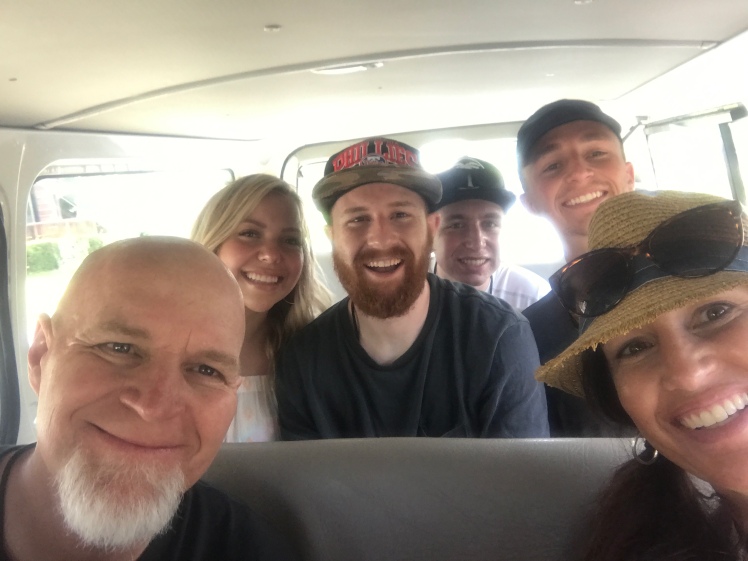 Our first stop was Sherman Arch’s Iguana and Marine Park. It cost $10 per person and I think worth every penny, my husband, who doesn’t have a love for  Iguana’s like me, could have done without it, but I was in heaven! 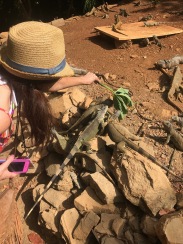 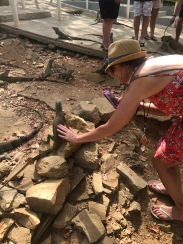 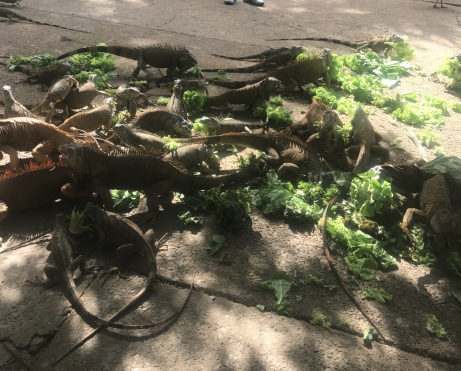 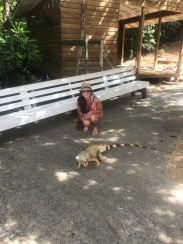 I was picturing Iguanas in cages, I was pleasantly surprised when we got there, Iguana’s were everywhere roaming around freely, it was amazing! It looked like a scene from Jurassic park! LOL 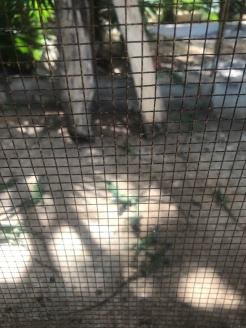 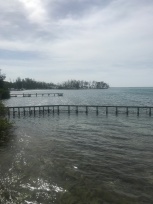 I wasn’t as Impressed with the Marina, but the Iguana’s made up for that.

Our next stop was to Victor’s Monkey Business.  This is The same Victor who set up the driver for us, so at this stop we paid for our driver and paid for the Monkey Business tour. It was only $5 per person, I would pay that just to see the Sloths, Where else in the world can you not only see a sloth, but hold one? Totally worth it! We saw Monkeys, Parrots, Lemurs, deer and of course Sloths. 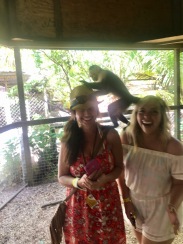 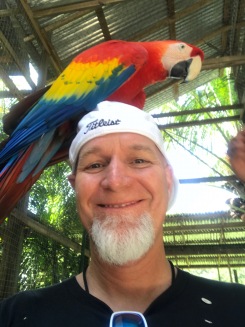 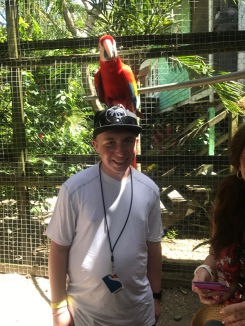 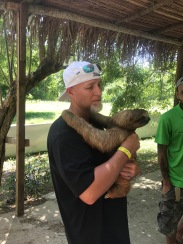 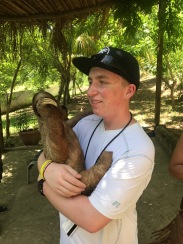 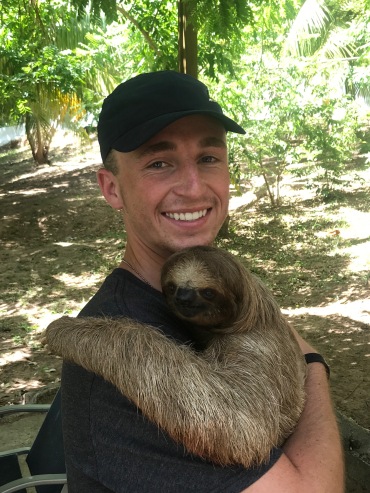 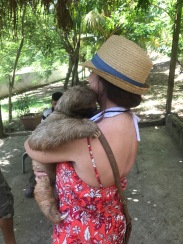 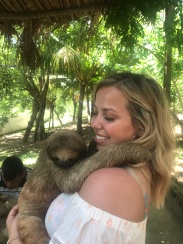 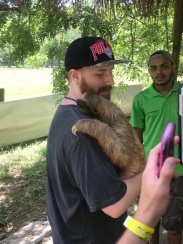 After playing with all the animals we told our driver we wanted to go to the best beach in Roatan. He took us to West End Beach, It was probably the most beautiful beach I have ever seen! We chose to go to the Beach that had access to beach chairs and facilities which cost $10 per person. Our driver just asked us how long we wanted to stay and he just sat there and waited for us.  We loved this beach so much, none of us wanted to leave! The only slightly annoying thing was the people on the beach trying to push massages, hair braiding and anything else you could think of, so we just went in the ocean and they left us alone. 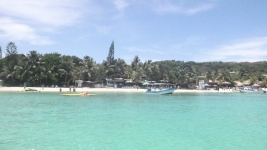 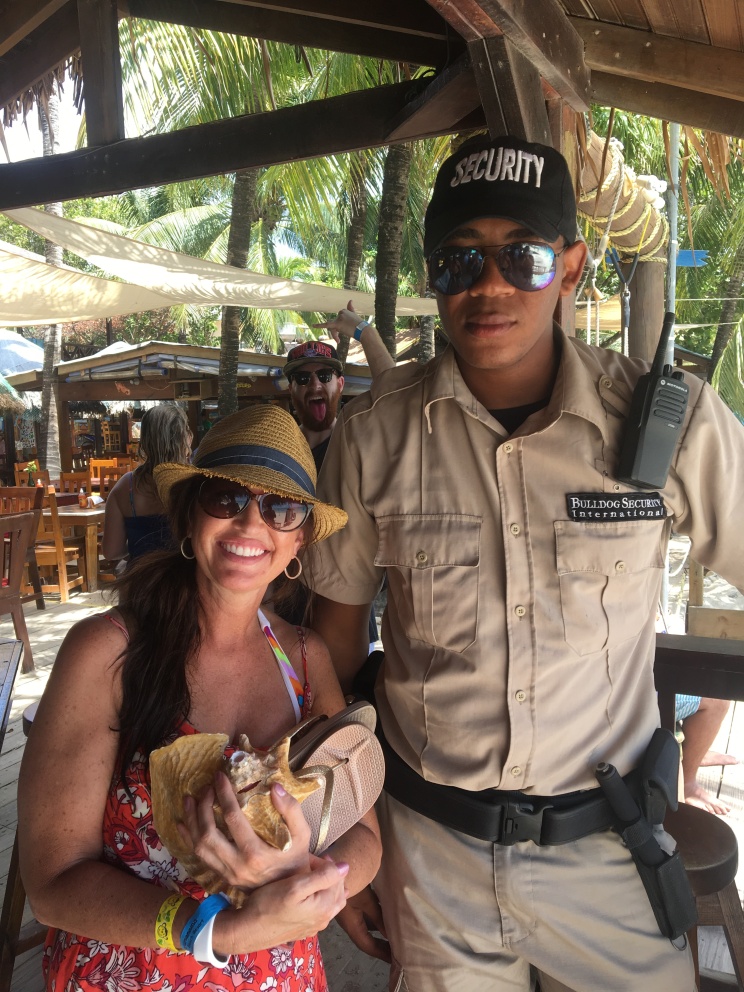 I think we all agreed that this was our favorite day, not only was it my favorite day it also happened to be my Birthday!  I couldn’t have asked for a better day!

After the Beach we had our driver take us back to the port so we could do a little shopping before going back on the boat. On the way back he stopped so we could take pictures.

I seriously didn’t want to leave this Island, I was thinking of ways I could move here, like really people I am not making this up, I fell in love with this place, I literally teared up when he was driving us back to port. I felt at home here for some strange reason. I really hope to go back someday!